The bicycle has been present in Winnipeg almost since the beginning. The Winnipeg cycling club was established in 1884, the same year as the Winnipeg Rowing Club, and was one of many organized amateur athletic clubs.

At that time the bicycle was unlike the ones we know today. They were ‘tall bikes’—with a large front wheel, they resembled five-foot-tall tricycles and had no braking system—and were ridden almost exclusively by men. We know from G.B. Norcliffe’s cultural history, Cycling to Modernity (University of Toronto Press, 2001), that bicycles and cycling captivated the imagination of Canadians during the last decades of the 19th century.

Among the many changes to the bike during this period of wide popularity was the development of the ‘safety bike.’ Much more like today’s bikes—they had two equally-sized wheels and hand-brake—the safety bike was also a gendered bike, with different frame configurations for men and women. Among its many gifts, the bicycle apparently made “at least a modest contribution to the emancipation of middle class women.”

However by the century’s end the bicycle had reached the masses and what had been an upper and middle class vehicle of leisure, adventure, fitness and perhaps even transportation, had lost some of its cachet. People of means and influence had become enthralled with the automobile. By 1912 Henry Ford’s Model T had been rolling off Dearborn assembly lines for four years and Winnipeg had more than 2000 registered automobiles. Interestingly, few of those automobiles were Fords, with the majority being more expensive luxury cars. Nevertheless, a shift was occurring and after World War I the car would be ubiquitous. The bicycle race in Foote’s photo appears to be well attended, but on Labour Day that same year 10,000 Winnipeggers attended the ninth annual Winnipeg Auto Club races.

The streets in Foote’s photos from the 1920’s are, at times, clogged with cars. But the bike can still be seen as a vehicle of active transportation in the photo of the window washers [pg 72], or that of the Worker’s Parliament meeting during the Winnipeg General Strike in 1919 [pg 61]. As evidence of leisure use, consider the Bob O Links miniature golf course photo from the 1930’s [pg 107; note too the horse-drawn carriage in the background] and, of course, the group photo of female cyclists taken at the legislature [page 148]. Considering the difficulties of keeping bikes running despite war rationing of basics like rubber this group’s ride was likely no small feat…

In both absolute and relative terms we may see more bikes on the street now than at any time in Winnipeg’s past. The city took shape, especially after the Second World War, to serve the needs of the automobile, but the bicycle has always been present. After the Second World War, city planning reflected the use of the automobile. Neighbourhoods expanded.

But the city that Foote photographed from 1905-1950, which is on a smaller, more intimate scale and includes the downtown, West End, Wolseley, West Broadway, and Osborne neighbourhoods, still exists.

Luckily, we Winnipeggers can still enjoy this ‘inner city.’ We can walk and bike in that city and still get somewhere in fifteen minutes, which is the classic measure of a working city. A city that in scale at least, if not in terms of etiquette and fundamental safety (bike lanes anyone?), makes sense for today’s cyclists.

David Larsen is UMP's Sales and Marketing Supervisor. He rides when he can and drives when he has to...

If you liked the return of the Favourite Foote Photos, there are more to come in the weeks ahead by U of S Native Studies scholar Adam Gaudry, the Winnipeg Free Press' Melissa Tait, Getty photographer Marianne Helm.

This is all to celebrate Imagining Winnipeg's nomination for the On the Same Page programme.

Email ThisBlogThis!Share to TwitterShare to FacebookShare to Pinterest
Labels: Favourites

Esyllt W. Jones lives and teaches history in Winnipeg. She is the author of the award-winning Influenza 1918: Death, Disease and Struggle in Winnipeg (UTP, 2007) and, with Gerald Friesen, edited Prairie Metropolis: New Essays on Winnipeg Social History (University of Manitoba Press, 2009). She is currently working on a reinterpretation of the origins of medicare in Canada. 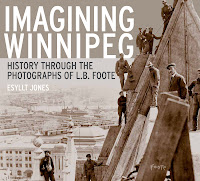 Born in Newfoundland in 1873, Lewis Benjamin Foote arrived in Winnipeg in 1902, where he bought a house on Gertrude Avenue and began a career as a professional photographer. For more than 50 years, Foote’s photographs chronicled the development of the city. He was an active photographer until 1947 and died ten years later.

Images from the Sixties Generation, Photographs by Gerry Kopelow (U of M Press, 2009).

"L.B. Foote's Winnipeg is a boomtown of staggering abundance and meanest privation.

His city teems with a mad sense of community - everywhere people, people and more people, throngs of new citizens forever gathering, spilling over, lining up; everyone held rapt and almost intoxicated by grand ceremony, fevered ritual or political upheaval.

So much giddy newness plopped down on top of the nations that came before and on the timeless, pristine, soon-to-be -bedevilled plains.

Foote honours human, city and prairie alike with his peculiar and ennobling eye."
— Guy Maddin, director of My Winnipeg.

In fall 2012, University of Manitoba Press will publish a new book of photos by Winnipeg’s most famous photographer, L.B. Foote (1873-1957), prepared and introduced by award-winning historian Esyllt Jones.

There are approximately 2,500 images at the Manitoba Archives but that’s just a fraction of the photographs Foote took in the more than five decades that he documented Winnipeg and parts of Manitoba outside the perimeter.

University of Manitoba Press went looking for some of the lost Foote photos...and Manitobans responded, rummaging through their attics and photo albums.

UMP would like to thank everyone who submitted photos and shared their stories!

About U of M Press

University of Manitoba Press is dedicated to producing books that combine important new scholarship with a deep engagement in issues and events that affect our lives.

Founded in 1967, the Press is widely recognized as a leading publisher of books on Aboriginal history, Native studies, and Canadian history.

It also publishes a wide-ranging list of books on the heritage of the peoples and land of the Canadian prairies.